Arriving in Capri from mainland Sorrento on a boat provided my first view of the island.  Given that it was a hot day in late spring, I went straight for a spot in the shade to admire my surroundings.  To get to Anacapri, I took an open air bus up the side of a cliff where I tried not to look down.  Looking straight across instead made it easier for me to enjoy the view without becoming alarmed.

After wandering in and out of cafes and shops, I had the opportunity to go on a chair lift to the top of the island.  I was a little uncertain about this, because I thought the view was good from where I was standing.  However, when I saw the actual chair lifts, I felt simultaneously nervous and intrigued.  This was because the chair was made of wooden slats, there was a flimsy safety bar and the whole thing was hanging from a rather thin metal pole.  In my mind I mulled over these questions:  Should I do this?  Would I regret it if I didn’t?  Who would know if I did this anyway? 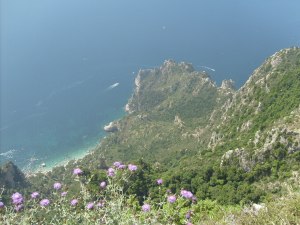 After grilling myself with these and other thoughts, I decided to go on the chair lift.  I stood in line (apparently there were others willing to do this.)  While waiting my turn I was debating the wisdom of my choice.  The line was short or I’m sure I would have decided against it.  When it was finally my turn, I sat on this somewhat flimsy chair, had an attendant push down the “safety” bar, and off I went.  At first it felt wobbly, and then as I settled in, it felt more stable.  The first thing I realized was that I wasn’t wearing a hat and I was facing the sun.  I accepted the fact that I would have a lovely sunburn from this.  Next, I had the sensation that one of my sandals was about to fall off of my foot.  Actually this was probably a good thing because it kept my mind off the fact that I was essentially dangling off the side of a cliff.  I wondered what I would do if my sandal did fall off.  The only way to make sure it wouldn’t happen would have been to lean over and fix it, which I was NOT going to do!  I thought I’d check if there were any shoe stores at the top.

In the end I had to accept the fact that my sandal was loose, mostly because I wanted to remember everything else that was happening.  Beneath me were people’s backyards, vegetable gardens and sheds, gazebos and patios.  I wondered what it would be like to be weeding your garden here with a continuous parade of people going by.  Then I noticed that on my one side was the land, and the other was the sea.  There was no sound except the hum of the chair lift and the ruffle of a slight breeze.  The rest of the trip was uneventful (I didn’t lose my sandal), and the view from the top was well worth the ride.

The return trip was also beautiful and peaceful, and this time I was able to fully concentrate on the sights.  I could see everything better because my back was to the sun.  And as it turned out I only received a minor sunburn.  Ever since then, I’ve felt rather proud that I decided to try something totally different to experience Capri. 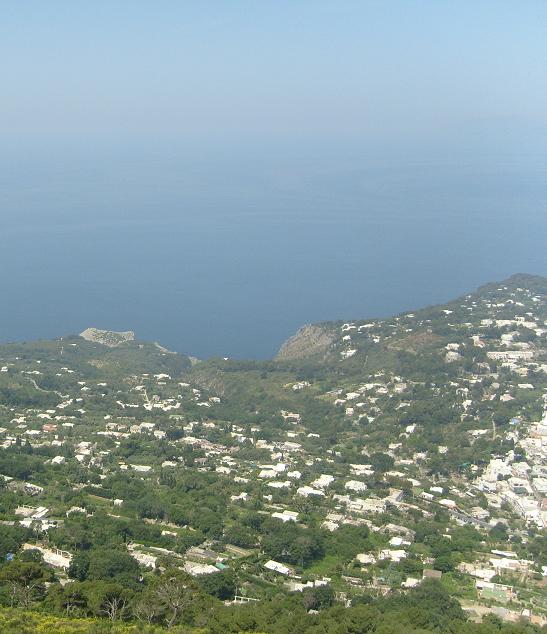 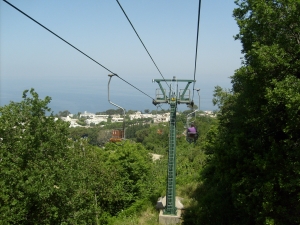 10 thoughts on “Capri from a Chair Lift”

Error: Twitter did not respond. Please wait a few minutes and refresh this page.